A new book from architect Charlotte von Moos explores "the vanishing architecture of a 'Paradise Lost'" — Miami in the Eighties, the decade of Miami Vice, Arquitectonica's pastel-colored buildings, large beachfront houses, and other South Florida creations.

Although it starts with a handful of video stills from Miami Vice — one of them famously capturing the bright red stair of Arquitectonica's iconic Atlantis apartment building on Biscayne Bay — In Miami in the 1980s: The Vanishing Architecture of a "Paradise Lost" is hardly a winking glance back to a time and place of style and excess. The subtitle hints at how Charlotte von Moos, who not long ago arrived in Miami from Basel, Switzerland, has infused the book with what she describes as "a melancholic mood" brought about by her encounters with notable buildings on the precipice of their demolition and a public uninterested in their fates. In Miami in the 1980s is a call to protect what remains of the city's extraordinary buildings and infrastructure created four decades ago. What follows is a visual tour through Von Moos's excellent, highly recommended book. The book design, by Teo Schifferli with Fabian Fretz, is firmly rooted in the bold colors and geometries of the decade associated with postmodernism.

The book consists of four essays — two of them by Von Moos — as well as a photo essay by Max Creasy and a collection of selected projects; the last comprises the bulk of the book. The first of Von Moos's essays is devoted to Arquitectonica's Babylon, a ziggurat-shaped apartment building in red that was completed in 1981 and was the author's first encounter with Miami's 1980s architecture when visiting the city in 2018. One year later, in 2019, the Babylon was demolished after Miami commissioners overturned an earlier decision by the city's historic preservation board to protect the building — one of the first designed by Arquitectonica. Following Max Creasy's photos of the soon-to-be-demolished Babylon is the collection of nearly twenty projects — built, demolished, modified — from Miami in the 1980s. Not surprisingly, Arquitectonica is the star of this section of the book, with no less than seven projects among the nineteen. Pictured is The Palace (1982), the first of three large condo apartment buildings in Brickell, followed by The Atlantis (1982) and Imperial (1983). Contributions by other architects, artists, and designers are a diverse lot, including the mass transit Metrorail and Metromover, skyscraper designed by SOM and I.M. Pei, and, as seen here, Isamu Noguchi's revamp of Bayfront Park completed in 1986. Arquitectonica was founded in 1977 by Bernardo Fort-Brescia, Laurinda Hope Spear, Hervin Romney, Andrés Duany, and Elizabeth Plater-Zyberk, with Duany and Plater-Zyberk leaving to found their own eponymous practice just three years later. Their early work is theatrical, as in DPZ's office seen here. Note the pink-on-black drawings that Von Moos uses to appropriately document the buildings in the book. Another significant building — and the subject of Von Moos's second essay — is Ca'Ziff, the waterfront house designed by Maria de la Guardia and Teófilo Victoria in a Mediterranean style for Sunglass Hut founder Sanford Ziff, who died in 2017. Like the Babylon, Ca'Ziff was demolished. Just as the book starts with pop-culture images from Miami Vice, it ends with spreads from a fashion magazine shot on location at Arquitectonica's Spear House (1978), the firm's first commission and an icon of 1980s Miami that is also known, aptly, as The Pink House. 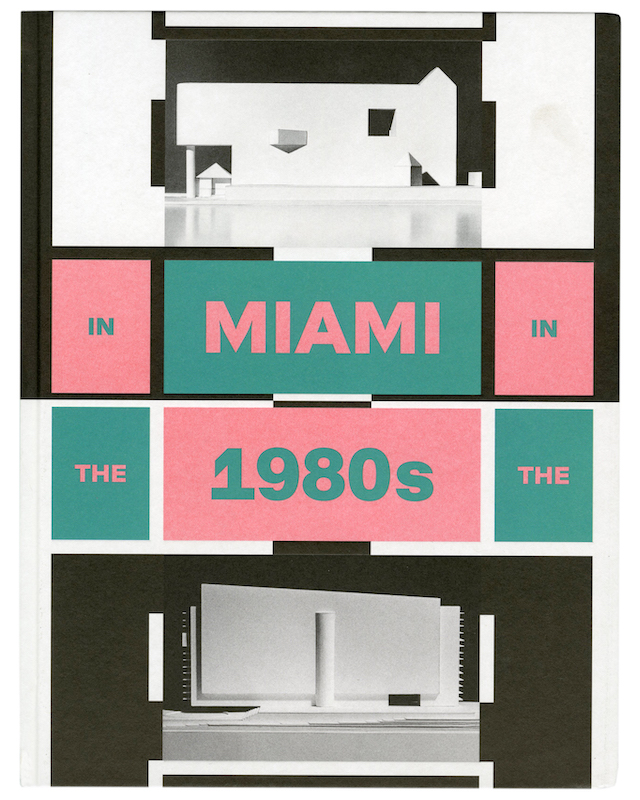