Covers of the first ten issues of Int|Ar, from Interventions and Adaptive Reuse, edited by Liliane Wong and Markus Berger, published by Birkhäuser

Interventions and Adaptive Reuse is a recently published that looks back at ten years of academic journalism focused on the “responsible practice” of adaptive reuse. Looking to the past, by virtue of an approach that has preservation at its heart, the book also provides perspectives that can inform future interventions and adaptive reuse projects.

One of the most repeated statements accompanying arguments for the adaptive reuse of buildings over their demolition is courtesy of Carl Elefante, a former president of the American Institute of Architects: “The greenest building is one that is already built.” The simple yet highly effective environmental mantra served as the title for an article by Elefante in the summer 2007 issue of Forum Journal (PDF link), the journal of the National Trust for Historic Preservation, in which he explored how “preservation is going to make a valuable contribution to sustaining” communities in the United States. Even though the term “adaptive reuse” was first used in 1973, three years after the first Earth Day, Elefante’s article was provoked by Al Gore's 2006 documentary An Inconvenient Truth and Ed Mazria's presentation of the Architecture 2030 Challenge at the 2006 AIA National Convention. Riding this apparent wave of environmentalism and sustainability, Markus Berger, Heinrich Hermann, and Liliane Wong, faculty in the Department of Interior Architecture and Rhode Island School of Design (RISD) decided to do something about what they saw as a dearth of published material on adaptive reuse, founding Int|AR Journal of Interventions and Adaptive Reuse in the fall of 2008. Its first annual volume released in 2009, Int|AR celebrated ten issues over one decade with last year’s publication of Interventions and Adaptive Reuse: A Decade of Responsible Practice, edited by Berger and Wong. Early in the book, in “The Social Agenda of Adaptive Reuse,” Wong mentions Elefante’s now familiar article as “a direct mandate for adaptive reuse based on environmentalism.” But the journal founders, associate editors, and student assistants who shaped the ten volumes did not limit themselves to environmental concerns when exploring the many facets of adaptive reuse, even though the urgency of climate change demands that more buildings be saved rather than demolished to take advantage of their embodied energy and carbon. Berger and Wong structure the nearly thirty contributions from the ten issues into six thematic chapters (appropriation, authenticity, ecology, equity, identity, and memory and redemption) that “speak to the social issues of a decade,” per Wong. The themes also inadvertently serve as a lens for looking at recent adaptive reuse projects, such as the more than forty US Buildings of the Week featured on this website in 2021 under the theme of renovation/adaptive reuse. Appropriation, the first chapter, relates to the flexibility of buildings, in their ability to change uses over time; to the editors, “in reusing an existing structure for a new purpose, adaptive reuse is distinguished from architecture and the act of building form where there was none.” Maintaining historical appearances is also a distinguishing aspect of adaptive reuse, though the degree to which it is done varies, such that architects of adaptive reuse projects become mediators of Authenticity, the subject of the second chapter. In regards to Ecology, “quantitative evidence indicates that despite two decades of efforts towards sustainable design” in new buildings, the editors assert, “a net zero carbon future lies in the reuse of structures.” With many heritage districts around the world strongly aligned with gentrification and social justice concerns coming to the fore in recent years, it is important to ask, as the Equity chapter does, “who benefits from adaptive reuse?” and “can adaptive reuse be a means to achieving [social justice] or redressing the inequity of the past?” Clearly aligned with authenticity, the chapter on Identity looks at ways in which buildings that change uses over time “grapple with new identities in their adapted existence.” Lastly, Memory and Redemption focuses on projects that are sites of “negative heritage”: places of atrocities that “hold memories that cannot be erased” but potentially serve as “instrument[s] of healing and justice.” The contributions to Int|AR collected in Interventions and Adaptive Reuse are primarily projects on buildings and places and interviews with notable architects and artists. A couple of highlights of the former include Stefano Corbo’s piece, from Volume 09 of Int|AR, on the FRAC Nord-Pas de Calais, where architects Anne Lacaton and Jean-Philippe Vassal “cloned” an old boat warehouse; and a collaborative piece from the same volume on the Rosa Parks House Project, in which artist Ryan Mendoza dismantled the one-time home of the civil rights icon, moved it to Berlin, then delivered it to the WaterFire Arts Center at RISD for a temporary exhibition. Although divergent in many ways, the two projects illustrate the malleability of buildings and the way adaptive reuse projects collage old and new elements into entities with various goals: a stage for art and events in one case and a complicated site of memory in the second. Two standout interviews are those conducted by Liliane Wong with Italian artist Edoardo Tresoldi, whose architectural installations sometimes recall demolished or ruined structures, and with Italian architect Roberto Collovà, whose projects often confront the historical layers of cities on Sicily, where he lives and works. The first, from the tenth volume of Int|AR, echoes the importance of cross-disciplinary contributions and attitudes in interventions and adaptive reuse projects, while the second, from Volume 05 (the first to be published by Birkhäuser, the journal’s current publisher), elevates the practice of preservation in designing for resiliency. "Taking on the Shape of Things – Roberto Collovà: The Spirit of Resilience" interview with Liliane Wong (Photo: John Hill/World-Architects)

With adaptive reuse on the minds of many architects and architectural writers — including this one, who developed the theme for the 2021 US Building of the Week accordingly — it is hard to deny the value of an academic journal focused on the adaptive reuse of existing structures. Arguments for sustainability are at the forefront, but Int|AR illuminates the myriad other creative considerations at the heart of adaptive reuse. The sampling of contributions in Interventions and Adaptive Reuse serves to celebrate “a decade of responsible practice” at RISD but it also stimulates students and practitioners interested in adaptive reuse and perhaps will convert many more people to the idea that “the greenest building is one that is already built.” 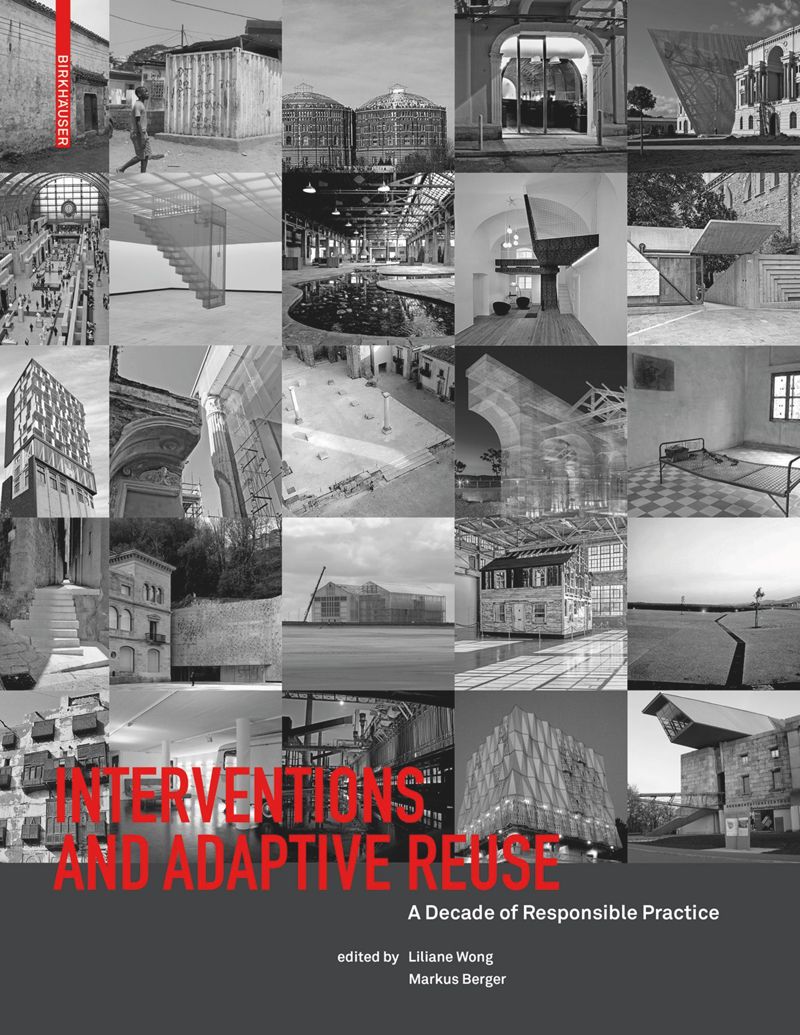 Interventions and Adaptive Reuse: A Decade of Responsible Practice
Edited by Liliane Wong and Markus Berger