Sergei Tchoban – Lines and Volumes: Encounters with the Architect, Artist, Collector and Museum Founder is a new book of conversations between curator Kristin Feireiss and Russian-German architect Sergei Tchoban, who has practices in both countries but, as the subtitle makes clear, is much more than an architect. World-Architects digs into the book.

No visit to Berlin is complete — for architects, at least, and under relatively normal circumstances — without stopping by the Aedes Architecture Forum and the Tchoban Foundation – Museum for Architectural Drawing to see the exhibitions on display. The two institutions located on a former industrial site in Berlin's Prenzlauer Berg district are more than neighbors though. Kristin Feireiss, founder of Aedes, sits on the board of trustees of the Tchoban Foundation, alongside its founder, architect Sergei Tchoban. Exhibition openings at the Museum for Architectural Drawing, as revealed in the pages of Lines and Volumes, often coincide with podium discussions at Aedes. And while Tchoban does not display his own drawings at his museum — he calls such a thing "totally counter-productive, absurd even" — he has exhibited at Aedes, where an upcoming show will be dedicated to TCHOBAN VOSS Architekten, one of his two practices (the other is SPEECH architectural bureau). With this relationship in place for at least a decade now, Feireiss is the perfect person to have "encounters with the architect, artist, collector and museum founder" that is Tchoban. Lines and Volumes is a book of four conversations in four parts. The first focuses on Tchoban's design process: "From First Sketch to Finished Building," as the chapter is titled. Not surprisingly, for a man who founded a museum for architectural drawing, sketches play an integral part in his design process. Tchoban is never without a sketchbook and he uses one that is small enough to fit in his pocket. Like many architects, he draws to understand but also to explain, with many of his sketches digitized and sent via smartphone to architects at his studios. Tchoban is very open with Feireiss about how he works through a design as well as how he structures his days — revealing details such as how he takes care of emails while being driven around — all of it exuding a logical approach that nevertheless leads to unexpected creations like the Museum for Architectural Drawing. One thing that comes to the fore in this first chapter is the control Tchoban maintains over projects; he relies on his partners and numerous employees, as all architects do, but he does not involve them until his sketches have led to solutions. Park in Leningrad with view on the Church of the Savior on Blood, ink, white highlights, paper, 1979. (Drawing: Sergei Tchoban © Tchoban Foundation)

The second part, "Everything Begins with the City," takes readers from Tchoban's upbringing in St. Petersburg, Russia, to the present. Early experiences are clearly linked with his life as an architect as well as the theoretical positions he has developed in recent years. Living in two apartments (parents and grandparents) in two parts of the city (city center and new housing development) appears to have planted the seed for an appreciation of the qualities of space found in traditional urban spaces and a criticism of the "lovelessness" of newer developments. As articulated in 30:70: Architecture as a Balancing Act, the 2018 book Tchoban wrote with historian Vladimir Sedov, the majority of "background" buildings — the 70% of the title — need to regain the texture that was second nature in older buildings, many now gone, in order to better relate to the monuments of contemporary architecture that are in the minority but capture more of the attention. While not aping traditional styles, this literal texture is evident in such projects as Veren Place Sovetskaya. The "harmony of contrasts," as he calls it, aims to create "livable, lovable" cities. Projects like this one also illustrate Tchoban's strong conviction that facades should be structural, not treated as thin surfaces clipped on to exterior walls. The penultimate part, "On Drawing, Collecting and Exhibiting," traces another history: from illustrated children's books to a growing collection of drawings now obtained through auctions and other grown-up means. While Feireiss reminisces about Serafin und Seine Wundermaschine (Beeby and the Funny Machine), "the story of a little kid and his dream house [of] inspiration and lively fancy," Tchoban singles out the Pushkin books by Ivan Bilibin, "whose illustrations were like folk images of Russian art." Collecting started when Tchoban was in his early thirties and bought a print of the first work in Utagawa Hiroshige's One Hundred Famous Views of Edo series. Representations of architecture eventually took precedence over art, and one of the most important illustrators in this regard was Pietro di Gottardo Gonzaga, an Italian set designer in the late 1700s and early 1800s who used sepia-brown ink and watercolor together. Tchoban's own drawings, such as those presented here, clearly owe a debt to Gonzaga's centuries-old technique. The last of the book's four parts focuses on the Museum for Architectural Drawing, which can be seen as the convergence of Tchoban's various roles: architect, collector, artist, curator, and exhibition designer. Ten years before the museum opened its doors in 2013, Tchoban and Feireiss collaborated on Hand-Drawn Worlds, a book of drawings by contemporary architects and, for Tchoban, "further affirmation of people's enthusiasm for architectural drawing." Tchoban's own enthusiasm for the media extends literally to the facade of the museum: its structural concrete facades feature reliefs based on drawings by Gonzaga and Angelo Toselli, another Italian scenographer. Tchoban conceptualized the skewed, stacked cubes as a drawing cabinet; in turn, the surfaces express what is contained inside the diminutive museum. Although it is currently closed until further notice as part of Germany's measures to combat COVID-19, the exhibitions inside the Museum for Architectural Drawing are a diverse and rewarding lot, ranging from Piranesi and British Neoclassicism to Alexander Brodsky, Thom Mayne, James Wines, Lebbeus Woods, and other contemporary architects with instantly recognizable output. As Deyan Sujdic describes him in a contribution to Lines and Volumes, Tchoban is "a cultural entrepreneur determined to give architectural drawings the attention that they deserve." Turns out Tchoban is worthy of our attention too. 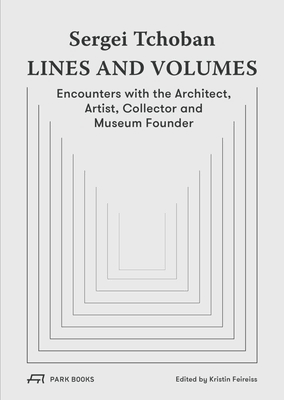 Sergei Tchoban – Lines and Volumes: Encounters with the Architect, Artist, Collector and Museum Founder
Edited by Kristin Feireiss
With a contribution by Deyan Sudjic