The 21st edition of Sir Banister Fletcher's A History of Architecture on the left, with a few of its previous editions (not to the same scale) on the right.

The 21st edition of the famous Sir Banister Fletcher's A History of Architecture, first published in 1896, was released in late 2019. In addition to being the first revision this century, the longstanding reference is for the first time in color, in two volumes, and in an online format as well as in print. World-Architects dives into the two-volume tome.

Major changes to the book that has served as a textbook for architectural history classes for many decades are evident in the title of its 21st edition: Sir Banister Fletcher's Global History of Architecture. Fletcher's history has been global since before the 18th edition in 1975 — the one I also have in my possession, with chapters on China, India, Japan, and other places beyond Britain and Europe — but now that fact is front and center. More importantly, this global nature permeates the entirely rewritten text undertaken by general editor Murray Fraser, managing editor Catherine Gregg, and 88 contributing authors. But as Fraser writes in his Introduction, "it was not possible to have developed a more globalized architectural history before." He has relied on recent scholarship that critiques Western cultural dominance, while at the same time relying upon the chronological and geographical format of previous editions, in which buildings in certain eras and countries/regions are explained in easily digestible chunks.

The new edition's 7-part, 102-chapter structure (most chapters end up being around 20 to 40 pages) makes the daunting tome a bit less daunting, while at the same time admitting truly international coverage of architecture over the last 5,500 years. Additionally, the online version offers today's students a format more in line with their native digital skills and perhaps foreshadows future editions, which may "shift [architectural history] away from something that is closed and synthetic and seemingly fixed," in Fraser's words, "to one that is open and relational and provisional." The last spread from Fraser's Introduction at the beginning of the Volume 1 signals the global extent of the 21st edition, with a photo of Atelier Deshaus's Long Museum in China, and its acknowledgment of the growing influence of female architects, with a model of SANAA's 21st Century Museum of Contemporary Art in Japan. (Image courtesy of Bloomsbury)

With more than 2,000 completely rewritten pages, it's hard not to wonder why the 21st edition even adopts the Sir Banister Fletcher name. Why not create something entirely new, or at least make the book reflect how new it actually is by dropping his name? There are practical considerations, such as the fact the editions are financed by a trust bequeathed by Sir Banister Fletcher to the Royal Institute of British Architects (RIBA) and the University of London, both of which hold the title's copyright and were involved once again in the latest edition. But mainly the continuity reflects how Fletcher's history has been a standard for more than 100 years and therefore was worth tracing and building upon — to use some architectural parlance — but not copying.

Through numerous publishers, editors, and contributing authors, the editions bearing the familiar Fletcher name have long been important references, even as they were criticized for their Western biases for much of their existence. The original edition was published in 1896 as A History of Architecture on the Comparative Method, written, somewhat confusingly, by Professor Banister Fletcher and his son, Banister Flight Fletcher. The "Sir" in subsequent editions signals that the younger Fletcher, who was knighted in 1919, had a greater role in the book's style and format, and, obviously, its evolution than his father, who died in 1899. In the handful of editions since Flight's death in 1953, the editors and authors tried to overcome the book's Western bias and be more global. Some of the Banister Fletchers drawings that pepper the 21st edition of the architectural history bearing their name. (Image courtesy of Bloomsbury)

One of the mainstays of the many editions, though, has been the Fletchers' drawings, which explain various formal, structural, and constructive aspects of important buildings. Some of these drawings are included in the 21st edition, but they are downplayed (many have been moved to the Glossary) in favor of photographs throughout. The photos supposedly hold less authority than drawings produced by a single source, but photos come with their own biases, especially when approaching the present, when photography serves to present architects' buildings in idealized conditions.

Updates since Sir Banister Fletcher's death tended to happen at the pace of one per decade: the 17th edition came out in 1961; 18th edition in 1975, 19th edition in 1987; and the 20th Centennial edition in 1996, 100 years after the original. Fraser's major reworking was released 23 years after the 20th edition, much longer than the norm. Before him, fellow UK academic John McKean was asked, in 2005, to edit the 21st edition, coming to the conclusion that a complete "rewriting of the text and reshaping of the book" in a post-colonial vein was in order. His approach was approved by the RIBA/University of London board, but for some reason never saw the light of day. Then, in 2013, Tom Dyckhoff was brought on as editorial consultant and, in Fraser's words, "laid down much of the early groundwork" for the book bearing his name. Although Fraser's editorial commitment spanned the roughly four or five years leading up to last year's publication, the 21st edition's truly global character reaches back more than a decade and involves contributors not listed on the cover. Important architects, organizations, movements, and other considerations are highlighted in sidebars that stand out on the page thanks to blocks of color. (Image courtesy of Bloomsbury)

As mentioned, the 21st edition more or less follows the structure of earlier editions, with the whole book in chronological order (Volume 1 is 3500 BCE-1500 and Volume 2 is 1500-present) and each chapter focusing on a particular country or region. Like previous editions, each chapter includes key buildings from the time and location being discussed, but they are given longer descriptions in the new edition and therefore more depth. Gone are the style headings; so chapter 27 in the 18th edition, "Renaissance Architecture in Italy: Fifteenth to nineteenth century," finds its equivalent as chapter 58, "Italian Peninsula, 1400-1815." This move away from a reliance on historical styles is shared by many fields, institutions, and publications today. One example that springs to mind is the recently expanded Museum of Modern Art (MoMA) in New York, whose curators no longer describe artworks in the reconfigured galleries in terms of the various historical "isms" used as a convenient shorthand but often loaded with predetermined meanings. In the case of architectural history, these meanings came courtesy of European scholars closed off from other contexts and, in the case of Fletcher, with colonial overtones.

Fraser and his contributors (each one is credited at the beginning of the chapters they wrote) could not completely abandon historical styles, but it's clear there was a concerted effort to address considerations beyond form and function, be they environmental, social, political, or economic. The many voices — all 88 of them — ensure a more lively and less authoritative book, but one that also includes some overlap, contradictions, and omissions, things that Fraser sees as positive outcomes of the reworked book. Yet, in the end, with 5,500 years of global architecture covered in 102 chapters across 2,500 pages, many buildings, architects, and places are treated just cursorily. With so much human creation to tackle, this was bound to happen. Thankfully, a list of books and articles closes each chapter, giving readers of Sir Banister Fletcher's Global History of Architecture reasons to venture elsewhere for further readings of history. The last 100 years of architecture in Russia is presented in a 40-page chapter in Volume 2, yet another indication of how global the Global History of Architecture is. (Image courtesy of Bloomsbury) 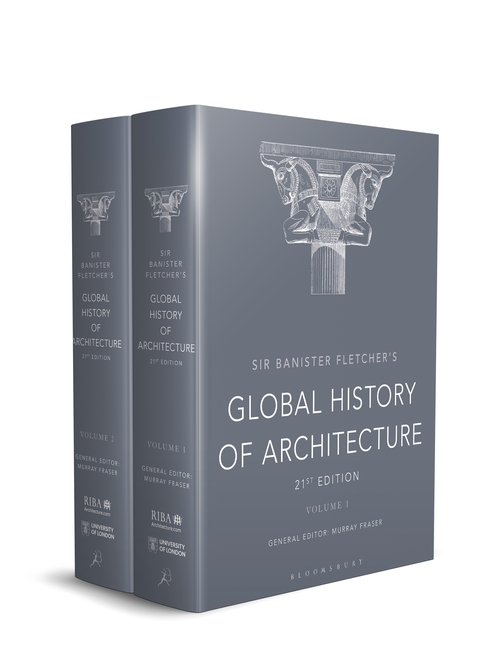