Two Decades of the Open Call Two books and two exhibitions celebrate two decades of the Flemish government in Belgium commissioning architects for building projects through the Open Call, a unique "more-than-a-competition" process that has resulted in more than 300 completed buildings, landscapes, and infrastructural projects to date. Most importantly, the program is responsible for a marked improvement in the quality of public architecture in Flanders this century.

It is a time for celebration and reflection. The Flanders Architecture Institute, located at De Singel in Antwerp, is hosting the last stop of the traveling exhibition Open Call. 20 Years of Public Architecture, and at the same time it is displaying Coming of Age. Architectural Competitions in Flanders and Brussels, an exhibition on architectural competitions in Belgium from the 1980s to the 2000s. (Both are on display until April 17, 2022.) In addition to the two exhibitions that focus on architectural projects on two sides of the establishment of the Open Call in 2000, two recently published books mark the twentieth anniversary of the Open Call: Celebrating Public Architecture. Buildings from the Open Call in Flanders 2000–21 edited by Florian Heilmeyer and More Than a Competition - The Open Call in a Changing Building Culture edited by Maarten Liefooghe and Maarten Van Den Driessche. These books respectively celebrate 70 of the nearly 350 completed projects and critically examine the history and challenges of the Open Call process. What is the Open Call?

The Open Call is a voluntary process by which departments in the Flemish government and municipalities in Flanders, the Dutch-speaking region of Belgium, can ask the Flemish Government Architect for consultation on building, landscape, and infrastructure projects. The client and Government Architect determine a brief and invite Belgian and international architects to apply for projects on a twice-a-year basis. Unlike open competitions, in which architects submit proposals — sometimes in the hundreds, like the controversial, and ultimately failed, Guggenheim Helsinki competition — the Open Call narrows down the candidates in two stages to roughly five architects for each project, with those architects submitting proposals and getting compensated for them. Finally, the client, in consultation with the Government Architect and input from the community, selects a winner, after which the project then develops like a more conventional architectural commission. Around 700 Open Calls have been made public to date, with nearly half of them physically realized. A few traits of the Open Call process are worth highlighting in more detail:

But why was the Open Call created, and why in 2000? Some answers lie in the two decades leading up the millennium, when architectural competitions in Flanders captured the region's aspirations. The quality of modern architecture in Belgium in the 20th century was less than stellar, as summarized by G. E. Kidder Smith in his 1961 book The New Architecture of Europe: "Of all European countries, Belgium is least to be excused for not contributing more to contemporary architecture." (The "mediocrity of its architecture" means Belgium has three buildings in the book while Switzerland, comparable in geography and population, has nearly thirty.) The invited competition for the Sea Trade Center in Zeebrugge, which was won by the Office for Metropolitan Architecture in 1990 but was never built, paved the way for other competitions that would strive to elevate the quality of public architecture in Flanders.

Sea Trade is one of ten competitions presented in Coming of Age. Architectural Competitions in Flanders and Brussel at De Singel. Curated by Mathilde Breukink, Sofie De Caigny, and Petrus Kemme with the Flanders Architecture Institute, the exhibition expresses the aspirations of architects, clients, and the public in a specific period and place. To the curators, "the selected competitions make up the building blocks that enabled the emergence of an architectural culture" and therefore directly led to the professionalization of competition procedures that took the form of the Open Call.

The other exhibition at De Singel, Open Call. 20 Years of Public Architecture, picks up where Coming of Age leaves off, presenting "a cross-section of the Open Call projects from the past 20 years." The exhibition, organized by the Flemish Government Architect and curated by Maarten Liefooghe and Maarten Van Den Driessche, opened in 2019 in Ghent and traveled to Brussels, Hasselt, and Kortrijk, before its last stop in Antwerp. The main section is "Wunderkammer," which looks at "seventeen public buildings under the microscope," including the Redevelopment of the Theaterplein and surroundings in Antwerp by Studio Associato Secchi-Viganò (below, also on the cover of Celebrating Public Architecture). The curators use photographs to document the buildings but also models that pull away the "building faces" to "isolate a different aspect of the appearance of the buildings." This writer has not attended the exhibitions at De Singel, so I've relied on the exhibition guides provided online and available via the links above. Such is the case for most people and most exhibitions (there are too many exhibitions in too many places!), and therein lies the importance of books in making the archival research and other efforts around exhibitions more permanent and more widely available. The 20th anniversary celebration of the Open Call has yielded two publications, one a visual presentation of about a fifth of the more than three hundred projects completed to date (Celebrating Public Architecture. Buildings from the Open Call in Flanders 2000–21) and one a critical inquiry into the ongoing Open Call process (More Than a Competition - The Open Call in a Changing Building Culture). Numerous people, institutions, and companies were involved in the exhibitions and books but consistent across all of them is the Flanders Architecture Institute, which is based at De Singel and bills itself as "the main center for information about architecture from Flanders and Brussels." Simply put, Celebrating Public Architecture is a book of pictures and More Than a Competition is a book of words. Given the visual nature of architects, those both in and beyond Flanders should be more drawn to Celebrating, with its brief but beautiful presentations of seventy Open Call projects. The selection of built works is organized in four roughly equal sections that are separated by a trio of essays that illuminates the Open Call process. Editor Florian Heilmeyer's essay, "The Open Call and the Wonder Years of Flemish Architecture," is the most helpful, particularly when it reveals the handful of design proposals for an Open Call, such as with Zaha Hadid's high-profile Port House in Antwerp (image below).

With a diversity of building types (libraries, town halls, cemeteries, care homes, etc.) on display, geography is used to structure the presentation, with a west-to-east traversal of Flanders moving from the beginning to the end of the book. While the cover flaps open to reveal maps that help in locating projects and illustrating the geographical density of Open Call projects, this writer would have preferred a chronological order, since it would have best described the evolution of the Open Call over its two decades and how the projects were potentially shaped by the five year terms of the Flemish Government Architects. More Than a Competition is edited by Maarten Liefooghe and Maarten Van Den Driessche, who also curated the Open Call exhibition. They counter their book to its companion publication, Celebrating Public Architecture, writing in the introduction: "With this book we rather want to reflect on the processes that led to these results. We wish to shed light on the less visible side of the Open Call, but also to question it." The Open Call process has its advantages over open competitions, but it is not sacrosanct; each Government Architect has put their own spin on the procedure, adapting the Open Call to evolving legal requirements as well as social, cultural, and other contexts. At its heart is a democratic framework that makes the search for architectural quality "'open' to all forms of citizen participation at the right moment in the process," as the current Government Architect, Erik Wieërs, writes in his foreword.

The book has six contributions, half of them long and half of them short. The former includes Véronique Patteeuw examining the critical dialogues around the Flanders Architectural Yearbooks published in the years leading up to the establishment of the Open Call in 2000; Maarten Van Den Driessche honing in on the policies of bOb Van Reeth during his five-year tenure as the first Government Architect; and Maarten Liefooghe taking a snapshot of the present moment and assessing the place of the Open Call in larger contexts. The three shorter essays find Carlo Menon, Beatriz Van Houtte Alonso, and Alice Haddad commenting on three installations from the Open Call exhibition. The longer essays provide greater depth and critical takes on a procedure worthy of such attention, while the shorter essays bring us back around to the exhibitions that, together with the books, signal the importance of the Open Call in Flanders and the desire for it to continue for another twenty years — and beyond. 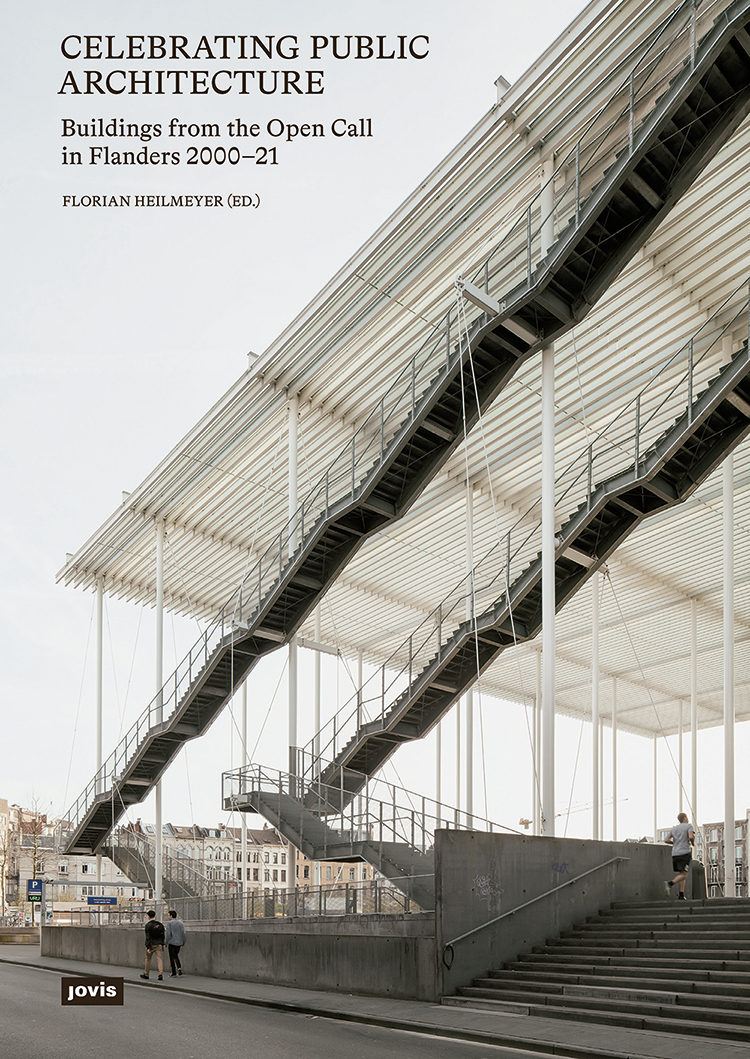 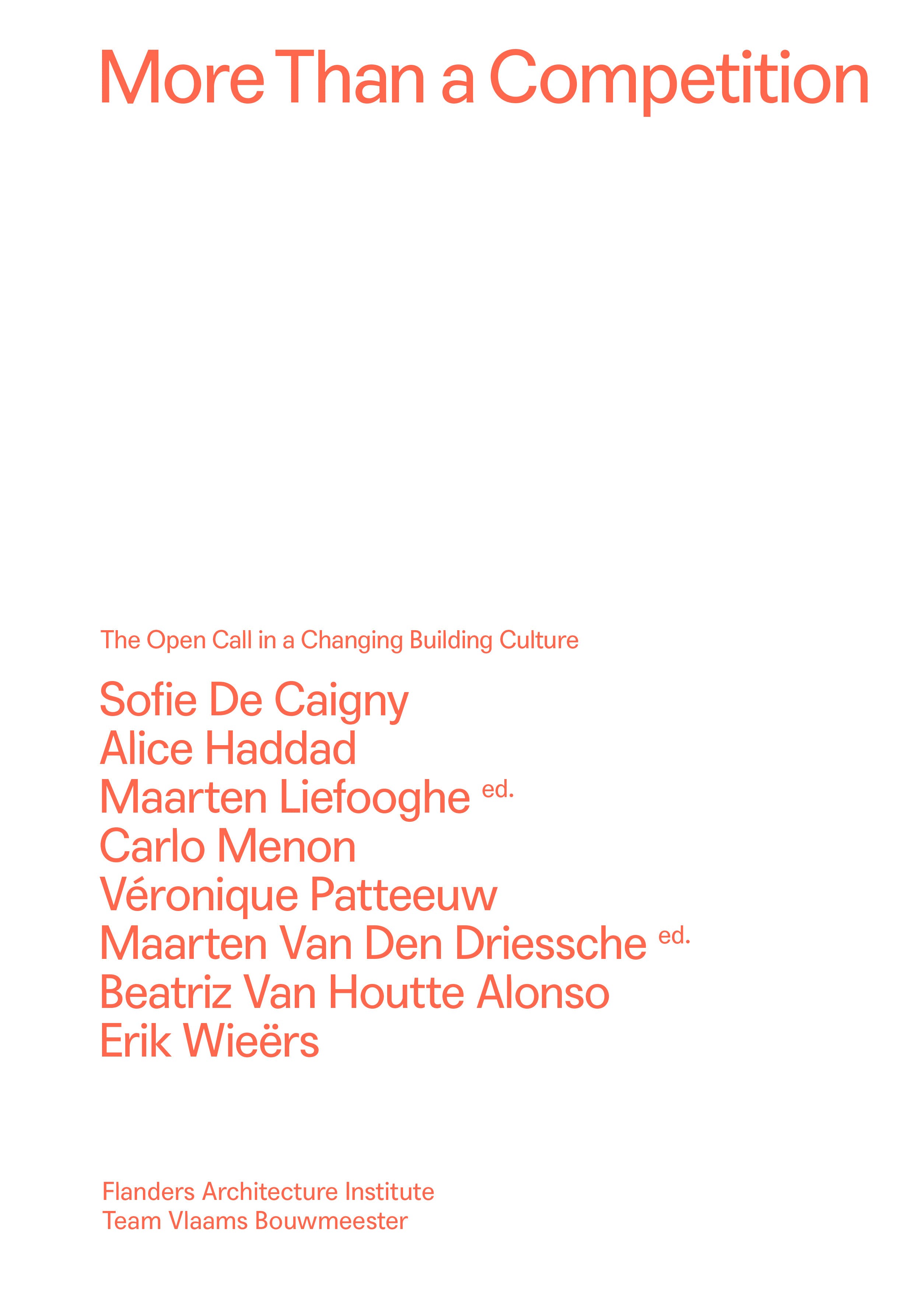